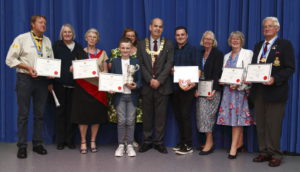 Felixstowe Town Council is delighted to announce the winners of their Civic Awards 2018.  At the Annual Town Meeting at Felixstowe Academy on Wednesday 9th May 2018 the Mayor, Councillor Nick Barber presented the following awards:

For her work for Old Felixstowe Community Association for nearly 20 years raising hundreds of pounds for the Association.

For supporting the Royal British Legion for many years.  Including being Parade Marshall for the town of Felixstowe and Standard Bearer for The RAF Association.

For her dedicated work with the Felixstowe Museum and its volunteers as Chairman and more recently as Committee Member.

Instrumental in the running of support groups for people living with dementia in Felixstowe.

At the event the Mayor also announced that a total of £17,346 had been raised in support of his three chosen charities: Felixstowe Area Community Transport (FACTS); Level Two Youth Project and Felixstowe & Walton Football Club

Each charity was presented with a cheque for £5,782

Felixstowe Town Mayor, Cllr Nick Barber, said “It was great to see so many people attend our new style Annual Town Meeting at the Academy, incorporating the Civic Awards and the presentation of cheques to my chosen charities.

Felixstowe has had a brilliant year. Without people like our Civic Award winners and all the nominees, the town would not be the wonderful place we know and love.

My charities were thrilled with the total raised. I must once again thank everyone involved for their efforts and making it such a memorable time for me as your Mayor.”

If you would like to nominate a Felixstowe resident for outstanding community service to the town of Felixstowe details of the Civic Awards for 2019 will be published on the Town Council website in due course.  www.felixstowe.gov.uk