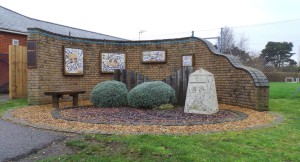 This Memorial Wall and garden is located at the far end of the playing field attached to Langer Primary School on Langer Road near the traffic light junction with Beach Road West and Walton Avenue in Felixstowe. It is the location of some of the deepest flood water in the town at the time of the East Coast floods on the night of 31st January 1953 in which 41 people lost their lives locally.  The memorial was unveiled at midnight on 31st January 2006 – exactly 53 years after the devastating floods hit. The anniversary is marked at the wall annually by the laying of a floral wreath which is paid for by a local group of well-wishers and group of associated friends and family.

The blue line at the top of the wall depicts the depth of the flood water that night and the plaque records the names of the victims. A full list of all those who lost their lives can be found Flood Memorial Names.

The memorial was constructed by local builders, Drake and Plant and was designed as a contemplative space by local artists Rosemary Humphries and Claire Curtis with the mosaic works being made by local school children. It was paid for by a combination of private donations and funds committed by Felixstowe Town Council and involved many contributions in kind to convert the concept of the actual memorial and the artists’ cardboard model of the design into the physical structure.

A hand engraved book of remembrance was opened and now resides in Felixstowe Library.