A celebratory event to show appreciation of the work of the Armed Forces is to be held in Felixstowe this year.

2017 marks the 350th anniversary of the Dutch attack on Landguard Fort in Felixstowe and to mark the occasion, and to recognise the huge contribution made by our servicemen and women from the past until the present day, Felixstowe has been chosen as the venue for Suffolk Armed Forces weekend.

A weekend of action-packed entertainment is planned for Saturday 24 and Sunday 25 June 2017 with a high profile, one off free event for all age groups.

There will be a unique package of entertainment including music from choirs and military bands to an evening of pop and rock, military displays, food stalls, children’s activities and fireworks, and some thrilling battle re-enactments between the Dutch and English with cannon, muskets and swords. All this by Felixstowe’s fantastic seaside with all that has to offer as well!

The event is being sponsored by Felixstowe Town Council and organised in partnership by organisations including the Suffolk Armed Forces Covenant Group, the Landguard Fort Trust, Royal Marines Association and Royal British Legion, with assistance from local authorities and military units.

To find out more about the event click on the poster below (links to VisitFelixstowe.org.uk) 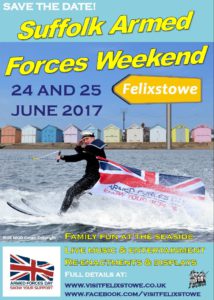