Volunteers are needed to help say ‘Thank You’ to our armed forces – past and present.

Suffolk Armed Forces Weekend 2017, which is being supported by Felixstowe Town Council and Suffolk Coastal District Council, is being staged in Felixstowe on Saturday and Sunday, 24 and 25 June.

The action-packed weekend will recognise the huge contribution made by our servicemen and women from the past until the present day – it will also mark the 350th anniversary of the Dutch attack on Landguard Fort.

This historic event was the last time there was an attempted invasion of England, where foreign troops actually successfully landed on English soil – for details see:  http://www.visitfelixstowe.org.uk/assets/Documents/Darells-Day.pdf

However, to make the weekend a success, we need to recruit our own army….of volunteers!

Paul Grant, organiser of Suffolk Armed Forces Weekend in Felixstowe says “We are proud to be hosting this important annual event in Felixstowe, particularly as it falls on the 350th anniversary of the Dutch attack on Landguard Fort.”

“This is our opportunity to celebrate our proud military history, while also thanking our armed forces, past and present. However, we desperately need to recruit a small army of volunteers to help make the weekend a huge success.”

“It promises to be a weekend for Felixstowe and Suffolk to remember for years to come, and by volunteering you can play your part in making it something really special for the whole community.”

Volunteers are needed to help out with various roles and activities over the two days, including welcoming our VIP’s, visitors and families from the Armed Forces, plus you get to experience this spectacular event first-hand. No previous experience or training is required!

The full details of the programme are still being finalised – but the action-packed weekend will include: Live music from choirs and military bands to an evening of pop and rock, military displays, food stalls, children’s activities and fireworks, an air display, plus some thrilling battle re-enactments between the Dutch and English with cannon, muskets and swords, and lots, lots more.

For further details on becoming a volunteer, please contact Felixstowe Forward on 01394 444577 – or email felixstowe.forward@eastsuffolk.gov.uk 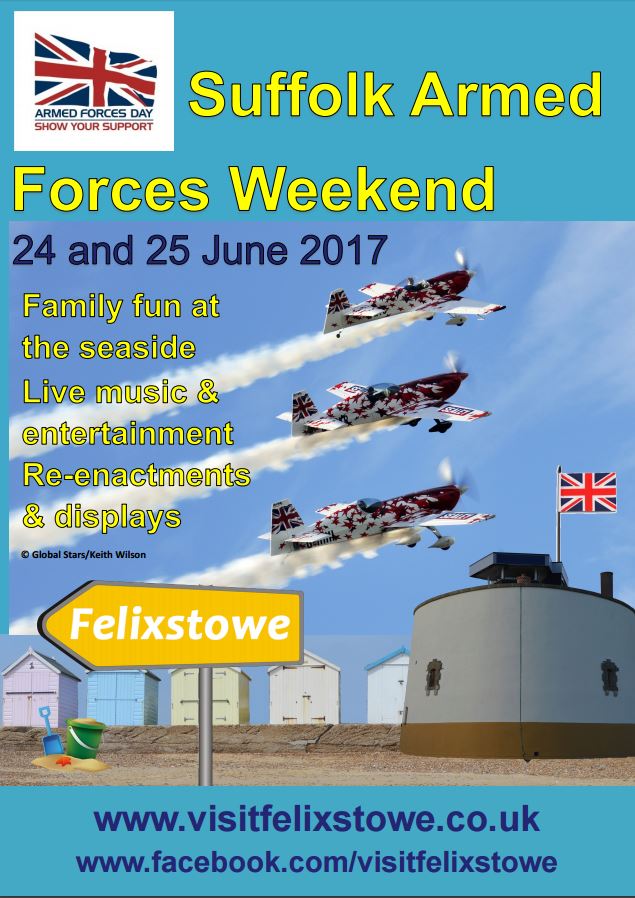 The Suffolk Armed Forces Weekend is a county event for the whole community, which is being supported by a variety of organisations such as the Royal British Legion, Suffolk Coastal District Council, Suffolk County Council, Landguard Fort Trust and the Royal Marine Association, as well as Felixstowe Town Council.