On 21 March, the Mayor of Felixstowe, Cllr Nick Barber together with fellow Town Councillors planted a tree in Allenby Park, Felixstowe. Joined by the Chairman of Suffolk Coastal District Council, Cllr Chris Blundell, and Mr Nicholas Newton, SCDC Arboriculture and Landscape Manager, the Mayor thanked Suffolk Coastal Norse for their help in acquiring the tree, a Whitebeam, on behalf of the Town Council.

Beneath the tree a plaque was placed reading “Planted by Felixstowe Town Council in commemoration of the 65th anniversary of the reign of Queen Elizabeth II, who in 2017 became the first British monarch to have a Sapphire Jubilee”. 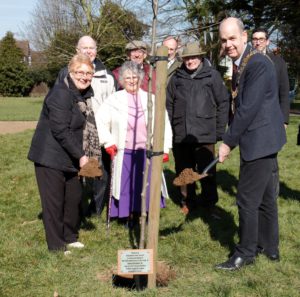