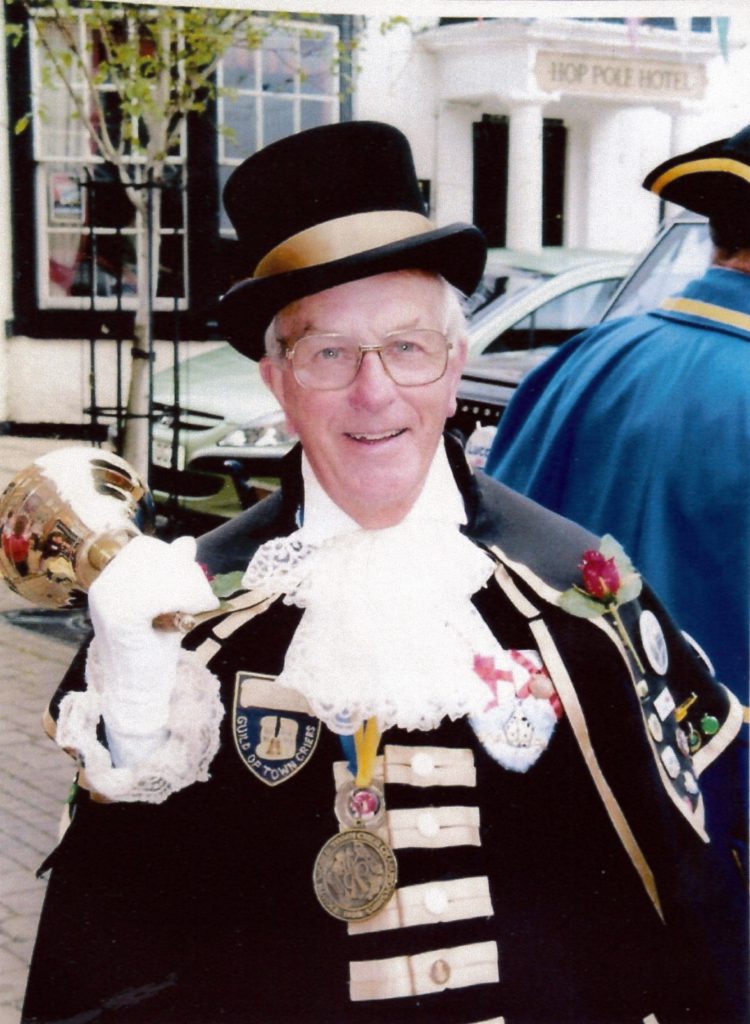 Jimmy or Jim to his friends, Mr Wearne was best known to Felixstowe as the local Town Crier – a role he carried out with pride entering competitions around the world – leading the Felixstowe Carnival procession for many years and, on retiring was procession judge. Jim passed away peacefully in his sleep on 3rd October at Highcliffe House Nursing Home.

Felixstowe Town Mayor, Cllr Nick Barber, said: “Jim was a much loved resident of Felixstowe and for many years provided the unmistakable voice of the town as its Crier. I will always remember him leading our Carnival procession. He will be sadly missed.”

Jim was born and raised in Felixstowe and his favourite place to play growing up was Trimley Marshes or to swim in the open air pool. He use to play tennis every Saturday afternoon with his best friend and always finished by going for a chocolate milkshake. After leaving school at 15 years old he took an apprenticeship at Ransomes in Ipswich, later joining the Royal Air Force and being posted to Lincolnshire before eventually returning to Felixstowe.

His neighbour, Sue Kempster remembers him fondly: “In 1986 Jim took an Open University course and got a Bachelor of Arts degree. He entered the world of amateur dramatics and was a natural born performer, from singing to dancing and acting.  He played numerous parts at the Spa Pavilion and in Trimley, making a lot of his own costumes and won awards for his amateur performances.

Jim was never married and didn’t have children of his own but always spoke of how holding Yvonne, his sister’s baby, in his arms when she was just two-hours old, as the greatest moment of his life.

Jim did hundreds of amazing things with his life, too many to list, and not a minute of his life was wasted. My partner and I have known Jim since we moved next door to him seven years ago. I joined him at the Felixstowe Music Theatre Company and we performed several shows together. We both feel honoured to have shared this time with this lovely, kind gentle, man.”

Jim’s funeral service is being held at Seven Hills Crematorium at 1.30pm on Wednesday 25th October.