There will be a variety of entertainment, music and displays from the students of Felixstowe International College plus ‘Entertainment with Words’ by Janet Dann and the ‘Something Different’ Brass Quartet. 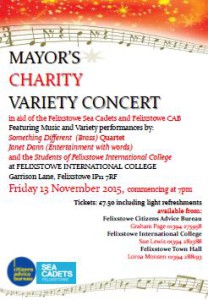 Proceeds from ticket sales will go towards the fundraising total and be split between the two charities at the Civic Awards evening next year.

Tickets are only £7.50 per person, including light refreshments and are available now from the following outlets:

For more information contact the Mayor’s Secretary, Lorna Monsen on 01394 282086 or email Lorna.Monsen@felixstowe.gov.uk