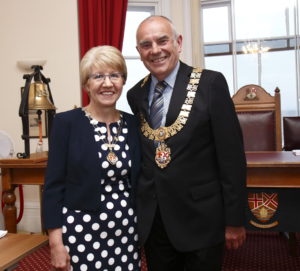 At its Annual Meeting of 16th May, Felixstowe Town Council elected Councillor Graham Newman as the Mayor of Felixstowe for the Municipal Year 2018/19. On the same evening Cllr Tracey Green was appointed as the Deputy Mayor.

On accepting the office of Mayor, Cllr Graham Newman, who has been Member of the Town Council since 2009, said:

“I am humbled and privileged to have been elected by my fellow councillors to serve a second term as Mayor for this coming Civic Year, 2018/19.  I am also delighted that my colleague Cllr Tracey Green – an established Town & District Councillor – has been elected Deputy Mayor.

Having said that, I know I am stepping into huge boots left by my predecessor, Cllr Nick Barber, who has done a fantastic job over the past year – representing Felixstowe all over the County and beyond – and raising a huge amount of money for his three charities.

So yes, 2018/19 will be a different type of mayoral year but I hope one which consolidates and builds upon the many aspects of our Town’s growing success. Equally I want to focus on supporting those who have yet to be touched by that success – for instance those facing the challenges daily such as loneliness and/or “where is the next  £ coming from”.   To that end, I will be supporting two charities that make it their business to help… The Laydens Community Café in Langley Avenue and The BASIC Life Charity.  Further Information can be found here

As we commemorate 100 years of cessation of World War 1’s hostilities, there will be an intensive programme of events in the town over the fortnight leading up to Remembrance Sunday. Many of these activities will be facilitated by the Town Council itself, so watch out for further details over the next few months.   Added to that, we have a growing programme of events throughout the summer season for the whole town to enjoy as hopefully we welcome thousands of visitors.”

If you would like the Mayor to attend a function in Felixstowe, or to simply ask him a question, please contact mayor@felixstowe.gov.uk