Felixstowe Town Council is delighted to announce the winners of their Civic Awards 2019, presented by the Mayor of Felixstowe for 2018-19, Cllr Graham Newman at the Annual Town Meeting held at Felixstowe Academy on Wednesday 8th May 2019.

For her work with the Felixstowe Society which included helping to produce last year’s Poppy Trail and exhibition at Old Felixstowe Parish Church. Bev is a talented archivist and helps to produce many local books on various historical events in the town.

For his work as a volunteer to the Felixstowe CCTV team since 2009, co-ordinating between the Town Pastors, the police control room and officers on patrol.

For her dedicated work with Felixstowe Area Community Transport (FACTS) as a driver, in the office and as a Trustee.

For his outstanding contribution to the Felixstowe Coastal Rescue Team, attending more than 430 emergency call outs over his many years of service.

As a founder member of Felixstowe Lions Club who continue to raise significant sums of money for local organisations in the community.

For their fundraising work in support of the local community hospital which has enabled the purchase of an X-Ray machine and televisions for each patient room.  They recently supported the hospital to become a dementia friendly site and continue to support patient comfort.

Sam was recognised for his hard work as a Felixstowe Academy Peer Mentor, supporting younger students who may be going through some challenges and need a listening ear.  He has also just learnt that he has been selected for the England under 16 Hockey Team.

A special award was presented to Nathan Upson who at just 6 years old showed incredible courage and determination to seek help when his mother fell suddenly ill at home.

A group of dedicated community nurses who provide nursing care to patients in and around Felixstowe whatever the weather!

Sue Reynold’s lovely photo taken at Felixstowe Ferry, which was entered in the ‘Undiscovered Felixstowe’ category of the photo competition was the overall “Judge’s Choice” Winner. 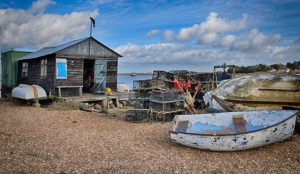 At the event the Mayor also announced that a total of £7000.00 had been raised in support of his two chosen charities: The Basic Life Charity and The Laydens Community Café. Each charity was presented with a cheque for £3,500.00

Cllr Graham Newman said: “the past twelve months seemed to have passed in a flash but it has been a huge privilege to serve our town in the capacity of Mayor again. The role allows a fascinating insight to the life of the town and an opportunity to discover the vast array of community groups we have and the huge range of activities they provide for residents. It was wonderful to see so many come together at the Annual Town Meeting as we honoured just some of those who give so much to our community.”

If you would like to nominate a Felixstowe resident for outstanding community service to the town of Felixstowe details of the Civic Awards for 2020 will be published on the Town Council website in due course.  www.felixstowe.gov.uk