Cycling is now officially permitted along Felixstowe’s Promenade as part of a year-long trial that launched on Tuesday 18 October.

The byelaw which prohibited cycling on the Prom was lifted to allow for safe and considerate cycling for a period on 12 months.

New, temporary signs have now been installed to promote the trial and inform pedestrians and cyclists that this is now a shared space and cycling is permitted on the Prom from October 2016 to October 2017. Cyclists are asked to be mindful or pedestrians and to prepare to dismount in crowded or narrow areas. 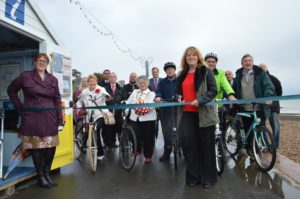 The trial has been put in place by Suffolk Coastal District Council, following a request from the Town Council and a consultation conducted by Felixstowe Forward earlier this year; the results of which concluded that  the majority of people would like to see cycling allowed on the Prom.

The trial period will continue to be monitored by Felixstowe Forward throughout the year and a final report at the end of this period will determine e the trial’s success.

“We want to promote cycling as a healthy and safe form of exercise across the District, so we’re pleased to see the Prom officially opened up to cyclists.

“The trial has been put in place in response to feedback from the public and we hope it will be a success.

If you have any comments, please send them to Felixstowe Forward by emailing: felixstowe.forward@eastsuffolk.gov.uk

In January 1983, Suffolk Coastal District Council passed some byelaws about ‘Riding Bicycles’, which make cycling on the Felixstowe Promenade unlawful where there are signs put up to prohibit this.

In November 2015, Felixstowe Town Council considered the byelaw’s purpose, asking if it was still appropriate.

The Town Council asked Suffolk Coastal District Council to consider the removal of notices prohibiting cycling on Felixstowe Prom for a period of no less then 12months; and, pending an assessment of the success of this initiative, consider permitting and promoting safe and considerate cycling on the prom on a permanent basis believing that the Promenade should provide a safe environment for all to enjoy.

After the consultation, to which over 500 people responded, it was therefore recommended to Full Council on 28 July 2016 that SCDC will respond to the request from FTC to consider the removal of notices prohibiting cycling on the Prom at Felixstowe for a period of no less than 12 months; and pending an assessment of the success of this initiative, to consider permitting and promoting safe and considerate cycling on the Prom on a permeant basis.

During the week commencing 17 October, contractors will be carrying out routine repair and maintenance work along the Promenade to the north side of Cobbold’s Point. This area may need to be closed off to the public and appropriate signage will be displayed.